The OSI Group history represents more than a century of strategic growth, driven by our customers and their market needs. 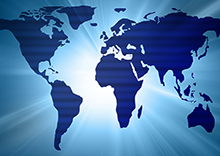 See the global locations that have resulted from over 100 years of growth.